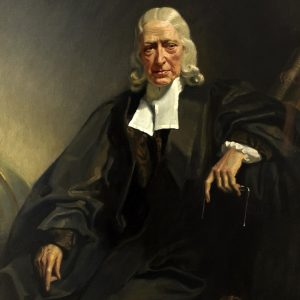 The rather grand and austere portrait depicts John Wesley in old age. It was painted posthumously in 1932, to commemorate the coming together of the Wesleyan Methodist, the United Methodist and the Primitive Methodist denominations that year.

Having Methodist roots himself, Frank O. Salisbury arranged and paid for the restoration of John Wesley's House in City Road in 1934. Salisbury painted many easel pictures of historical events and religious and allegorical scenes, as well as mural scenes for buildings. He painted five British prime ministers, five US presidents, and many other notable personalities of the interwar years (c. 1918-1939).

For his self portrait, see 1992/419 in the Collection.
View all services & events
We use cookies. By closing this banner, scrolling the page, or clicking a link, you agree to their use. Info.