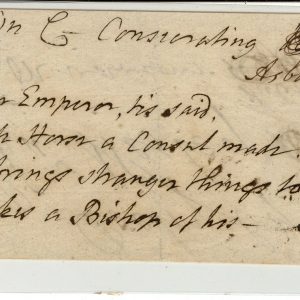 A Roman Emperor, tis said
His favrite (sic) horse a consort made:
But C. brings stranger things to pass,
And makes a Bishop of his - Ass!"

This ditty hints at a major late 18th century crisis between Methodism and the Anglican Church in England.

When John Wesley sought the ordination of some of his followers whom he wished to send to the American colonies in 1784, the Bishop of London refused. Frustrated, Wesley decided to ordain the men for the work himself and sent Thomas Coke as superintendent of the colonies to America. John's brother Charles was furious that John had performed the ordinations without the Church of England's authority, arguing that such action was tantamount to breaking with the Church. The rift and Charles's scorn became greater when Thomas Coke proceeded to ordain Francis Asbury as fellow superintendent, or bishop, of the Americas at the 1784 Baltimore Christmas conference of Methodist preachers.

The ordination signalled the formal breakaway of the American Methodists from the Church of England.
View all services & events
We use cookies. By closing this banner, scrolling the page, or clicking a link, you agree to their use. Info.