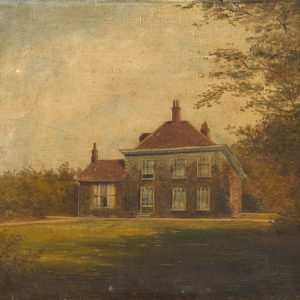 Epworth Rectory in Epworth, Lincolnshire, was John Wesley's childhood home. Originally a large thatched building dating to at least the 1600s, the building burnt down in a catastrophic fire in 1709. This almost cost John's life, but his near miraculous escape convinced his mother Susanna that her son was the biblical 'brand pluck'd from the burning' and destined for great things.

The new rectory was expensive, largely because it was built from brick, which was still unusual in this area at that time. In fact, the cost was almost ruinous for John's father, the Rev. Samuel Wesley (1662-1735), who had notorious money problems and once was thrown into debtors' prison for insolvency.

In December 1716 the house became the backdrop to one of the best-known 18th century poltergeist claims, the 'Wesley poltergeist'. The house is said to have been plagued by mysterious knockings and loud noises, heard and attested by all the Wesley family (bar the eldest sons, who were studying in London). The haunting was assumed to be a ghost the eldest Wesley daughter Hetty nicknamed "Old Jeffrey". The occurrences ceased as quickly and mysteriously as they started, at the end of January 1717.
View all services & events
We use cookies. By closing this banner, scrolling the page, or clicking a link, you agree to their use. Info.