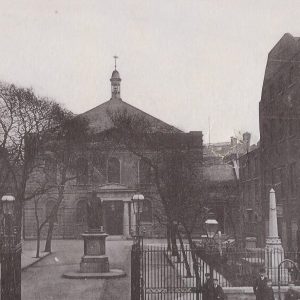 This unusual photograph dates just before 1900. Unlike most early images of the Chapel, it shows the whole site, including John Wesley's House to the right and the (then newly-built) ministers' manse to the left.

At the time, the Chapel had a small cupola on the roof. Probably, this was added for venting once gas lighting was installed, which gave off heat and created soot.

The landscaping of the forecourt in the image is still as laid out in the late 1700s. The straight lines of the pavement were removed and softened in the late 1970s when the Chapel was refurbished.
View all services & events
We use cookies. By closing this banner, scrolling the page, or clicking a link, you agree to their use. Info.