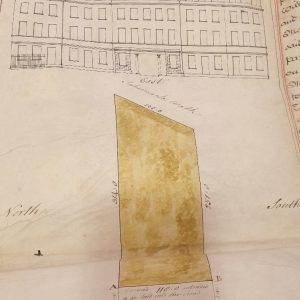 It includes a site plan and a drawing of the proposed view of the site from City Road by George Dance the Younger (1741-1825), the Architect and Surveyor to the Corporation of London. He was responsible for the design of public buildings in the City.

The title deed shows that Dance proposed a terrace of five houses facing City Road, at the front of the site. The Chapel, of which there is no design in this deed, was to be hidden completely, accessed by a central columned archway. This suggests that Wesley's Chapel, as a Nonconformist or dissenters meeting house, may not have been regarded as entirely respectable, or on a par with the established Church.

In the end, only two houses at either end of the proposed terrace were built, apparently both in a simplified version of Dance's design. The central space, today's courtyard, was kept free and the Chapel became visible from City Road.
View all services & events
We use cookies. By closing this banner, scrolling the page, or clicking a link, you agree to their use. Info.